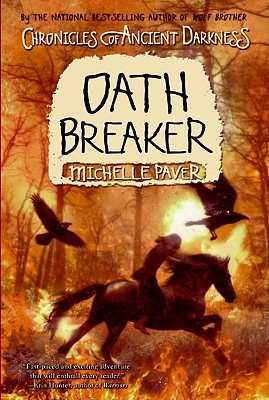 This is book number 5 in the Chronicles of Ancient Darkness series.

In the fifth book in Michelle Paver’s bestselling fantasy series, a struggling hero descends down a dark path. A thrilling read for fans of Brandon Mull and Jeanne DuPrau.

When he was outcast, Torak was the hunted one. Nine moons later he becomes the hunter when he vows to avenge the killing of one of his closest friends. Racked by guilt and grief, he follows the killer into the Deep Forest, where the World Spirit stalks the hidden valleys as a tall man with the antlers of a stag.

But there is a rottenness at the heart of the Forest, for its clans have succumbed to the lies of the Soul-Eaters. Here, Torak must face fire, war, and overwhelming evil. Oath Breaker is a story about keeping promises and the true cost of vengeance.