Mirage: Napoleon's Scientists and the Unveiling of Egypt (Paperback) 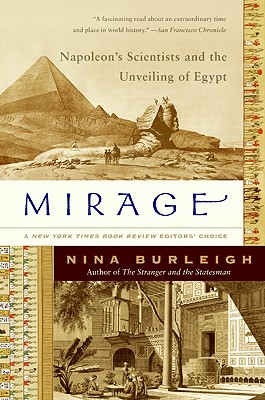 Mirage: Napoleon's Scientists and the Unveiling of Egypt (Paperback)

Two hundred years ago, only the most reckless or eccentric Europeans had dared to traverse the unmapped territory of the modern-day Middle East. But in 1798, more than 150 French engineers, artists, doctors, and scientists—even a poet and a musicologist—traveled to the Nile Valley under the command of Napoleon Bonaparte and his invading army. Hazarding hunger, hardship, uncertainty, and disease, Napoleon's "savants" risked their lives in pursuit of discovery. The first large-scale interaction between Europeans and Muslims in the modern era, the audacious expedition was both a triumph and a disaster, resulting in finds of immense historical and scientific importance (including the ruins of the colossal pyramids and the Rosetta Stone) and in countless tragic deaths through plague, privation, madness, or violence.

Acclaimed journalist Nina Burleigh brings readers back to the landmark adventure at the dawn of the modern era that ultimately revealed the deepest secrets of ancient Egypt to a curious continent.

Nina Burleigh is the author of four books. She is a noted journalist whose articles have appeared in Time, the Washington Post, New York magazine, Elle, and many other publications. She lives in New York City.

“With an easy style and an eye for striking detail, Burleigh concentrates on 151 French scientists, scholars and students who joined the expedition, tempted by hero worship of Napoleon and the prospect of scientific adventure.”
— Lisa Ko, author of The Leavers