Tales from the Boom-Boom Room (Paperback) 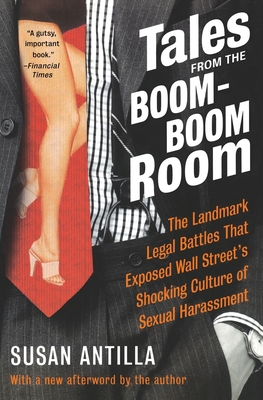 Tales from the Boom-Boom Room (Paperback)

In the 1990s, women in record numbers looked to Wall Street as a great place to build successful and lucrative careers.What many of them found there was not meritocracy, but a boy’s club of misbehaving stockbrokers, and a workplace culture that knew no bounds in its harassment and discriminating behavior toward women. Sometimes it was threatening language; other times it was physical intimidation; but often, it was much worse. Eventually, women who were subjected to this behavior exploited a loophole in stock-exchange rules and opened the door to unprecedented lawsuits that shook Wall Street to its very core.

Taking its title from the notorious party room at Smith Barney's Garden City, New York branch, Tales from the Boom-Boom Room is the detailed and riveting insider account of the lewd and obscene behavior that has run rampant on Wall Street. In this edition, author Susan Antilla provides a new afterword maintaining that despite some improvements in workplace conditions, women continue to face an uphill battle on Wall Street.

Currently an adjunct professor of journalism at New York University, Susan Antilla has written for the New York Times and was bureau chief of the Money section of USA Today and financial bureau chief for the Baltimore Sun. Most recently, she was a columnist at Bloomberg News.