The Wilderness Warrior: Theodore Roosevelt and the Crusade for America (Paperback) 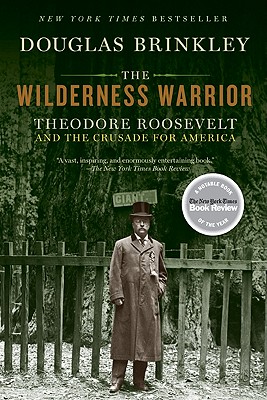 The Wilderness Warrior: Theodore Roosevelt and the Crusade for America (Paperback)

In this groundbreaking epic biography, Douglas Brinkley draws on never-before-published materials to examine the life and achievements of our “naturalist president.” By setting aside more than 230 million acres of wild America for posterity between 1901 and 1909, Theodore Roosevelt made conservation a universal endeavor. This crusade for the American wilderness was perhaps the greatest U.S. presidential initiative between the Civil War and World War I. Roosevelt’s most important legacies led to the creation of the U.S. Fish and Wildlife Service and passage of the Antiquities Act in 1906. His executive orders saved such treasures as Devils Tower, the Grand Canyon, and the Petrified Forest.

“To understand America, you need to appreciate Teddy Roosevelt. Doug Brinkley brilliantly uses the lens of Roosevelt’s love of nature to show why he is so influential, fascinating, and relevant to our own times. This wonderful book is as vibrant as he was.” — Walter Isaacson, author of Einstein

“No president has been a greater champion of our natural world—especially its wildlife—than Theodore Roosevelt. Now that extraordinary force of nature has his own champion in Douglas Brinkley’s stirring account of the man who turned our attention to conservation and the many glories of our American landscape.” — Ken Burns, co-author of The War

“What an absolutely perfect match between subject and writer. This is a major contribution to our understanding not only of Roosevelt but of the historic movement to save our wilderness.” — Doris Kearns Goodwin, author of Team of Rivals

“Douglas Brinkley has brought us an important, deeply researched, compellingly readable and inspiring story. Exactly a century after his Presidency, there could not be a better time to revisit and celebrate T.R.’s unfinished environmental legacy.” — Michael Beschloss, author of Presidential Courage