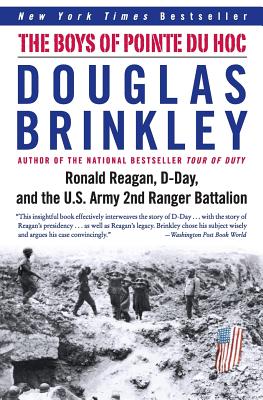 By Douglas Brinkley
Email or call for price. Handling fee may apply.
Available to Order - Usually Arrives in Our Store in 4 to 7 Days

The 100-foot promontory known as Pointe du Hoc -- where six big German guns were ensconced -- was the number one target of the heavy U.S. and British warships poised in the English Channel on D-Day morning. Facing arguably the toughest task to befall U.S. forces during the war, the brave men of the Army 2nd Ranger Battalion boldly took control of the fortified cliff and set in motion the liberation of Europe.

Based upon recently released documents, here is the first in-depth, anecdotal remembrance of these fearless Army Rangers. Acclaimed author and historian Douglas Brinkley deftly moves between events four decades apart to tell two riveting stories: the making of Ronald Reagan's historic 1984 speeches about the storming of the Normandy coast and the actual heroic event that inspired them and helped to end the Second World War.

“Brinkley knows there is sometimes a theater to war and always to its remembrance.”
— Publishers Weekly

“The Boys of Pointe du Hoc are needed today.... An important and entertaining book.”
— Bill O'Reilly, host of The O'Reilly Factor

“Brinkley knows there is sometimes a theater to war and always to its remembrance.”
— Chris Matthews, host of Hardball and author of Kennedy and Nixon

“In this jewel of a book, Douglas Brinkley proves his skills as a master storyteller.”
— Doris Kearns Goodwin, author of No Ordinary Time

“In this fascinating new study, Douglas Brinkley... sheds fresh light on the making of a crucial presidential moment.”
— Jon Meacham, author of Franklin and Winston

“A powerful tale that celebrates, and explores, the patriotism and pride inspired by America’s brave soldiers.”
— Walter Isaacson, author of Benjamin Franklin