Growing Up Empty: The Hunger Epidemic in America (Hardcover) 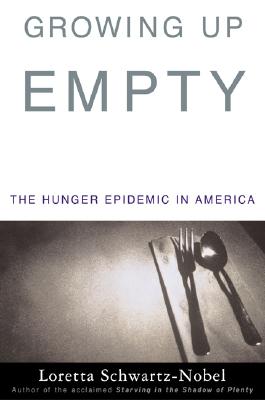 By Loretta Schwartz-Nobel
$24.95
Hard to Find

Already lauded as "a deft blend of tough investigative reporting and deep compassion . . . an unforgettable exploration of public policy, its failures and its victims" by the most respected senators, members of Congress, journalists and hunger advocates in the country, Growing Up Empty is a study of a hidden epidemic that still remains largely unacknowledged at the highest political levels. A call to action that will reenergize the national debate on the federal government's priorities, Growing Up Empty is advocacy journalism at its best.

In 1981, President Reagan incongruously announced to the world that there were no hungry souls in the richest nation in the world, that poverty had been virtually wiped out. But Schwartz-Nobel had found a different story in America's communities, and she laid bare the horrifying truth about hunger in the United States in her landmark work on hunger, Starving in the Shadow of Plenty. That book caused Americans to reexamine their priorities.

Twenty years later, Schwartz-Nobel returned to see how things had improved -- and discovered that it was all the same. As she tracked this hidden political and emotional battle, she was shocked to find that hunger is deeper and wider than she could have imagined, that it has reached epic proportions. It is running rampant through urban, rural and suburban communities, affecting blacks, whites, Asians, Christians, Jews and nonbelievers alike. And it is getting worse. The stories of the people she encountered are the core of Growing Up Empty. With a combination of skillful investigative reporting and a novelist's sympathetic and humanistic eye for detail, Loretta Schwartz-Nobel portrays an unforgettable reality of human suffering that need not exist.

Among the people we come to know in these pages are the new breed of homeless born of the "Welfare to Work" program -- working poor who have jobs but do not make enough to support their families-, immigrants who work under horrifying conditions for little money and fewer benefits; a formerly middle-class dentist's wife abandoned by her husband, reduced to stealing in order to feed her hungry children; soldiers who fight on our front lines, while their hungry young wives and children stand on bread lines and are denied benefits and baby formula at military health clinics.

In the "affecting and powerful" Growing Up Empty, Loretta Schwartz-Nobel has found the shrouded and silent victims of our public policies and brings us into their homes and hearts.

Loretta Schwartz-Nobel has won the Women in Communications Award, the Society of Professional Journalists Award, the Penny Missouri Award, the coveted Columbia Graduate School of Journalism Award, and has twice won the Robert F. Kennedy Memorial Award for outstanding coverage of the problems of the disadvantaged. She lives in Philadelphia, Pennsylvania.

“A penetrating journalistic study that puts a human face on [hunger]. ... A wake-up call to policy makers.”
— Kenneth Kusmer, author of Down and Out, On the Road: The Homeless in American History